A kidnapping in progress

We live in turbulent times. I was reminded last night that, even on the smallest scale, Mother Nature produces no peaceable kingdoms. While strolling through my rose garden, I became aware of a kind of seething movement beneath my feet. Looking down, I observed masses of large, red ants clambering over the pebble path. Large numbers were proceeding, with regimental precision, from a point beneath one of the shrub roses. Each of these held aloft a white egg case (technically a pupa, I guess). At the same time as these single-file rows of pupa-bearers streamed away from the point of origin, an equal number of unencumbered ants were marauding back in the direction of what I discovered to be a black carpenter ant colony under the shrub.

Fascinated, I watched the red raiders swarm the various entrance holes of the black anthill and emerge with their cylindrical spoils. I would have felt bad for the black ants, but they didn’t put up much of a fight, to be honest. Outnumbered and undersized, the adult inhabitants of the colony had fled the mound, taking refuge among the foliage of the bush, where they paced restlessly, watching the carnage below. Such immediate capitulation does not command respect.

One of these ants is not having a good time.

I followed the red ants as far as I could, across the full length of the rose garden and over the plastic border of the path into the deep foliage beyond. It occurred to me that, in the context of the scale of these determined creatures, the distance they covered from their victims’ fortress to their own is the equivalent of many miles for a human. Moreover, the four-inch path border they surmounted must be an Everest for them. Yet not a one faltered or deviated from its course. They proceeded with steely determination, and no jagged chunk of rock, inconveniently rooted thistle or giant sandaled shoe would deter them. (After the first half dozen crept over my toes, I got the hell out of their way.)

Consulting Wikipedia, I learned that the red ants were likely formica sanguinea, the blood-red ant. This is a slave-making species, which means they raid other ants’ nests and – you guessed it – kidnap the pupae from the brood chamber. They take them back to their own lair, where they hatch and become slave workers for their oppressive overlords. Geez, and those antz from the cartoon seemed like such nice guys. 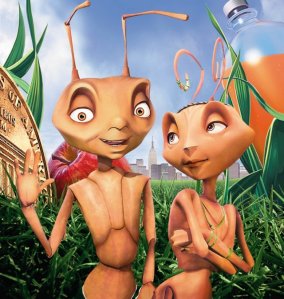 Don’t be fooled by their friendly demeanor. 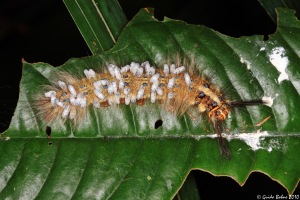 And you think YOU’RE having a bad day

The insect world is full of this kind of weird stuff. One summer I discovered a caterpillar on the grape vines that looked like it had grown spikes all over its body. Nope. Turns out the “spikes” were the pupae of some kind of wasp that eats the caterpillar from the inside out. Other parasites are able to turn their host bugs into zombies, controlling what they eat and how they behave. There’s a species that causes the caterpillar they infect to become the invader’s bodyguard, violently fighting off predators of the cocoons, even though the caterpillar-defender is destined be consumed by the baby wasps as soon as they hatch. Talk about ungrateful!

There’s even a parasite that causes its host – an ant, ironically – effectively to commit suicide by climbing to the top of a long blade of grass, the better to be eaten by a cow; the parasite needs to reside a while in a cow’s gullet as part of its life cycle. (There was no data on what sordid things they make the cows do.)

This is in your brain AT THIS VERY MOMENT

Fortunately for us higher orders, our brains have evolved beyond the point of being influenced by parasitic Svengalis*. Oh, sure, scientists have made some crazy claims that the parasite T. gondii, which disseminates itself through cat feces and has thereby infected a third of the world’s population with toxoplasmosis, is able to exert subtle control over its human hosts. The theory seems to be that, since infection by T. gondii has been shown to make rodents unafraid of, and even attracted to, cats – their natural predator – it follows that the nasty little beggars can also make us humans overly fond of and ultimately in thrall to our feline life partners.

What nonsense! In fact, I’d offer a mountain of conclusive proof that this isn’t true … but I suddenly feel compelled to go buy a case of Fancy Feast.

*Svengali is a character in George du Maurier’s 1895 novel, Trilby. The character holds an uncanny hypnotic power over his protégé. She is a singer, not an ant.