Note: Comments and sharing welcome (unless you have nothing good to say, in which case, keep your mouth shut.)

I’ve been reading about our national parks, otherwise known as “Scenic Places Where Idiots Go to Die.” I should provide a little context here by conceding that I am not a thrill seeker or a death defy-er. I am a rule follower and a safe-and-sounder. I view guard rails and bright yellow signs not as a challenge but as a helpful reminder: Here there be dragons. Because of my risk aversion, I will never be rich and famous. I will also never be a crumpled heap at the bottom of a 3,000 foot cliff.

Yes, he’s furry and adorable. But he is not your friend.

Weighty tomes like Death in Yellowstone, Death in the Grand Canyon and Death in Yosemite enumerate the many and sundry ways it’s possible to get yourself killed in these natural wonders. I bought Death in Yellowstone at gift shop at the entrance of the park and spent the rest of the trip afraid to leave the car. Yet avoiding grisly death would seem baby simple: don’t stick your face into the hole from whence comes the boiling-hot geyser. Don’t offer a grizzly bear a Hershey bar. Don’t back the DeSoto over the edge of the cliff when trying to get out of the parking lot. (All of these are real instances of death in Yellowstone.)

What part of this is hard to understand?

Stories of fragile mortality tend to begin something like these:

“The current was running fast the day the young man stepped into the river a dozen yards from the highest waterfall in the continental U.S. …”

“No trace was found of the missing hiker, other than his pup tent pitched next to a 900’ cliff …”

“When the roll of film in the camera found with the mauled corpse was developed, it revealed he was shooting photos of the grizzly’s cubs from a distance of 10 yards …” 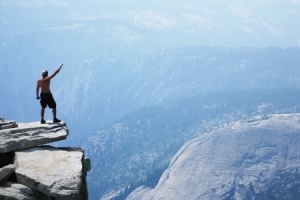 Dude! There’s a bathroom in the visitor center!

It’s not really surprising that an absurd number of young males die by falling off the precipice they were urinating off of, because … men. (Insert eyeroll emoticon.) How about the guy who thought he’d give his toddler a good scare by pretending to fall over the guardrail at the Grand Canyon. I’m pretty sure she was indeed scared – and scarred – by the sight of him toppling a mile into the abyss. Also, stylish sandals are not appropriate gear for climbing Half-Dome in Yosemite (unless your aim is to leave a smartly dressed corpse).

Bizarrely, people seem to feel a need to come up with irrational explanations for such incidents. There’s a guy who has made a career out of postulating that the many dozens of missing persons in national parks and forests were kidnapped and enslaved by Bigfoot. The comment section of YouTube videos like “Top 10 Strangest National Park Disappearances” offer many additional possibilities: UFO abductions, government conspiracies, gateways to alternate dimensions.

Here’s another possibility: people are stupid and reckless.

In obituaries, the line “She died doing what she loved” is never followed by “crocheting an afghan.” In our culture, ‘tis deemed nobler to die young with the twisted remains of your wingsuit around you than to expire in your own bed at an advanced age.

In the interest of full disclosure, I must admit that I was very nearly one of the statistics so meticulously catalogued in Death in Yellowstone. In my defense, I had, as they say, fallen in with bad companions. My traveling buddy is an inveterate wildlife junkie who will go to any lengths for her fix.

(No trip to the Black Hills with her could be complete without the following conversation:

“Let’s do the Wildlife Loop one more time.”

“A lot of the animals are nocturnal.”

“Yeah. The ones that eat you.”

I was with her on the aforementioned trip to Yellowstone National Park. One afternoon, after a torrential rainstorm, my animal-loving friend decided we should take a side trip on the Old Gardiner Road, hereafter referred to as the “Yellowstone Death Trail.” Formerly a stagecoach route, it’s a narrow, one-way dirt ribbon of road that runs five miles from the Albright Visitor Center to the Roosevelt Arch at the original entrance to the park. Guidebooks helpfully inform you that, “Park managers typically close the road to autos during and just after wet weather.”

Yeah, unless you get to them before the park rangers do.

The draw for my driver was the promise of elk, mule deer, bighorn sheep, bison and pronghorn antelope as well as scenic vistas of the Yellowstone River as you climb the rugged hillsides and twist around hairpin curves. It must be beautiful, if you traverse it with your eyes open. I did not.

The thing is, this trail tends to get very, very muddy when wet. And for those of you who aren’t familiar with mud (city slickers), it tends to be very, very slippery. So as my friend white-knuckled the steering wheel, guiding us ever so slowly up the slick inclines and around the skiddy curves, and as the van’s wheels sashayed alarmingly close to the edge of the cliff edge with every turn, I placed my hands over my eyes and said Hail Marys. I swear to God it’s true. By the time we reached the end of the road (where a “trail closed due to wet conditions” sign was helpfully posted), I’d made my peace with my Maker – including asking forgiveness for the Very Bad Thoughts I had about the person who decided going this route was a good idea. Here’s what I DIDN’T see on the Old Gardiner Road. Pretty!

And the wildlife we risked life and limb to see? Obviously I didn’t see any with my eyes closed. But my traveling partner reported not so much as a chipmunk along the trail. Because even rodents are smart enough to stay off the Old Gardiner Road after a rainstorm.

There’s a big family reunion this summer in some place called Lava Hot Springs, Idaho. If you’re looking for me, I’ll be in the cabin crocheting an afghan.