Who are you calling SENSITIVE?

I’m a Highly Sensitive Person. That’s a real thing, by the way, not just what your mother calls you after she suggests you’ve gained a little weight and you start to cry. Our always reliable friends at Wikipedia describe an HSP as, “a person having a high measure of the innate trait whose scientific name is sensory processing.”

More helpfully, Wiki offers attributes of HSPs: “having qualities of low risk taking, need for quiet (usually alone) high motivation to avoid overstimulation, preference for deeply meaningful conversations, greater awareness of subtleties in emotional and non-verbal communication and a sense of being different and not the ideal.”

A website called SpiritualExcellence.com reports that HSPs tend to possess the following “not the ideal” characteristics:

Nevertheless, the website assures me, most HSPs are “otherwise normal.” Hurray!

Apart from the item on disorder (squalor is my natural habitat), this is a pretty fair assessment of the World of Keri. Apparently the culprit is my amygdale, those almond-shaped bits of brain tissue responsible for feeling stuff. And wanting stuff. The amygdala is the villain in the following little melodrama that plays out in my life every single day.

Neocortex: You know if you have a cookie, you’ll hate yourself afterward.

Neocortex: Seriously, you’re not even hungry!

Neocortex: I hate myself.

I gather that this overactive amygdala is also responsible for the paralyzing mortification – something others might term prudishness – that I experience over basic bodily functions. I firmly believe that feminine hygiene products should be sold in lots of 10,000 so you only have to buy them once in a lifetime; I have been known to circle the check-out area of WalMart for 45 minutes until a female appeared at the cash register, ‘cause there ain’t NO way I’m putting my Kotex on the conveyor belt for some teenage boy to smirk over.

Modern science is working hard to solve some of the problems of the overly sensitive.

For me, the “walk of shame” isn’t being seen wearing yesterday’s clothes after a night of illicit passion. It’s being caught exiting that out-of-the-way, single-unit restroom I seek out when I have Serious Business to do. I can read the knowing contempt in my observer’s eyes: “She just pooped in there!”

As a freshman in college, I accidentally passed gas loudly in front of a dorm mate and spent the subsequent four years avoiding her. Tricky, since her room was next door.

I think I inherited this brand of squeamishness from my Dad. The sight of a brassiere accidentally fallen out of a clothes basket onto the basement stairs was like an electric fence for my pops. Unable to touch the thing or even step over it, he was barred from his downstairs workshop until I came home to retrieve the offending article.

Something similar occurred to me one summer when I rented a basement room in my campus’s Catholic Newman Center. Upon bringing my basket of delicates to the little laundry room off the communal kitchen, I was horrified to discover a pair of the resident priest’s boxers left in the washer.

Cue the theme from The Exorcist.

Of course I had to flee back to my lodgings and wash my scanties out in the bathroom sink, as it was unthinkable to mix my unmentionables with any article of clothing that has contained a clergyman’s manhood. That must be, at the very least, a near occasion of sin.

An excess of empathy is another delightful effect of my disordered Lizard Brain. For years I haven’t been able to watch much television. Reality shows are a mine field, because I cringe at every awkward thing the classless denizens of those programs do – and everything they do is awkward. (The Bachelor? Real Housewives? Mama June? Oh, my God. Kill me now.) Game shows and sports competitions are also out, because I feel so bad for the losers. And for the next few months I may just move into a cave somewhere, because everything about the political process, with its inherent conflict and contention, makes me want to crawl under a table and assume a fetal position. 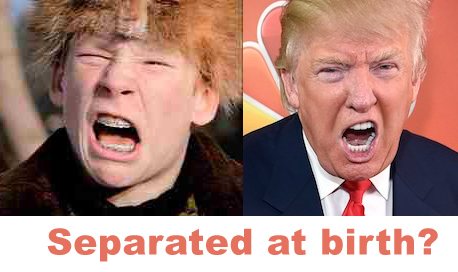 Most of my life I honestly thought all people had these hang ups cognitive challenges. Isn’t everyone paralyzed by grief when Charlie Brown doesn’t get a Valentine from the little red-headed girl? Turns out, no, they aren’t. Because Charlie Brown is a cartoon and doesn’t actually have feelings to get hurt. But he would be heartbroken if he were real, and that’s good enough for my wonky gray matter. I weep over it every year. 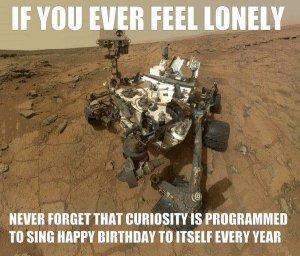 I’ve learned that the capacity to feel empathy for non-living objects (and even abstract concepts, like mathematics*) is actually a thing: science calls it Einfühling. It’s what explains my desperate need for NASA to send a rescue mission after Curiosity, the little robot rover that continues its unrelentingly lonely trek over the surface of Mars and (OMG, I can’t even) sings Happy Birthday to itself once a year.

How can the rest of you live with that? Are you monsters?

There are ways, I’m told, of blunting the effects of the too-avid amygdala, through medications or “self soothing techniques” (I’m picturing myself sucking on a pacifier). I don’t know … maybe, in this increasingly hard-edged world, it is my role to take on all the feels so the rest of you aren’t burdened with them – kind of like John Coffey in Stephen King’s The Green Mile.

But when bugs start coming out of my mouth, I’m done.

*I have no empathy for mathematics. Die, math! DIE