For decades, science fiction has been warning us that there would come a time when humanity would be vanquished by computers. That time is now. However, it’s not sleek androids brandishing laser cannons that will do us in, or even a suddenly sentient, megalomaniac collection of code like Tron’s Master Control Program.

Nope, civilization is bound to fall – and soon – under the weight of frustration at how much harder our labor-saving devices make life. Let me illustrate.

I took my newish car (a red Kia Soul; it’s adorable) to be serviced because the “check transmission” light came on. The mechanic looked it over carefully and told me there’s nothing wrong with the transmission.

“But the light is still on,” I persisted.

He shrugged. “Yeah, they just come on sometimes, and there’s really no way to fix that. It might turn off by itself, eventually.”

“So how will I know if something really does go wrong with the transmission?”

“The car will stop running.”

The high-tech ladies’ room at work had me convinced for a while that I was a vampire. The sinks will only dispense soap* and turn on the faucets if you perform the precise ritual that will convince the sensor that you are human. Yet no matter how I wiggled my digits or – eventually – clenched my fists in rage, the neo-Star Trek plumbing system refused to acknowledge my existence. Ditto on the self-dispensing paper towel dispenser*.

The space-age toilets are even more maddening. In one of the stalls, the damned auto-toidy flushes three times before you even get the door closed. In another, you have to do an exuberant dance (think Michael Flately) in front of the bowl to get it to do its job. There’s one downstairs which requires you to remain absolutely still on the throne, as the slightest deviation from true north will set off the flush … repeatedly.

On one occasion I was obliged to … ahem … extend my visit. Knowing the machine’s foibles, I held myself rigidly, moderating my very breaths like an Olympic marksman who only pulls the trigger between heartbeats. The stool was apparently satisfied with my endurance and held its peace. But I suddenly found myself plunged into complete darkness when the overhead lighting, which is also on a sensor system, decided the place was empty. Cue the Riverdance again to get the lights back on.

Me? Not according to the vending machine robot

A couple of years ago, the company I work for replaced the onsite coffee shop with a “self-service market.” Instead of the friendly lady behind the till who used to take my money, I am now confronted with a boxy contraption with which I must negotiate to get a bottle of soda. Step one is waving the bar code on the bottle in front of the ubiquitous sensor. Usually, this causes it to beep. Sometimes, if the label is a little crinkled or I’m not holding the bottle at the right angle or the moon is in retrograde, the machine refuses to accept my order.

If it does, I am presented with a screen that lists my tally and prompts me to place my thumb on – you guessed it – a sensor. With laser precision, this device reads my thumbprint and then, in a rather terse, female voice, informs me, “Account not found.”

“Account not found.” I swear, if I machine could smirk, that’s what it would be doing.

I remonstrate with her. “Look. I fed you $40 in credit just this morning, and you were happy to take it. Now you don’t know who I am?” 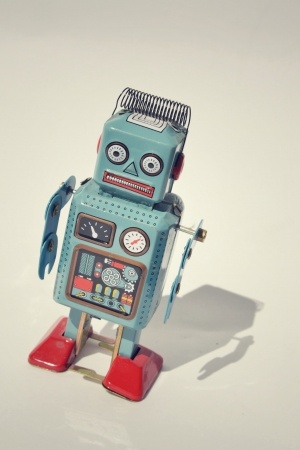 There follows the tedious process of rescanning my thumb and saving it to my profile. Finally I am able to secure my prize, a bottle of Diet Pepsi. Alas, it seems my paltry purchase displeases my mechanical mistress, as she dismisses me with a curt, almost frosty, “Thankyouforyourpurchase.” (And don’t let the door hit you on the way out.)

Am I the only person who has to endure these indignities, this cruel subjugation by supposedly mindless machines? Perhaps I will take a stand, get off the Grid, reclaim my humanity. But not until next week. I’m expecting my robot vacuum to come in the mail on Monday.

*These tormentors have since been replaced by manual ones. The faucets and toilets, however, continue their reigns of terror.