Artist’s rendering of me on a Mohror back day

I am a great believer in heredity, for the valid scientific reason that it allows me to blame my forebears for all my undesirable traits. Thus, when I shamble around, as bent-over and hunch-shouldered as that famous bell ringer from Notre Dame, I can respond to the stares of my coworkers with a terse, “It’s the Mohror back.” Similarly, I can attribute the dour attitude that prompts such grumbling to my paternal kin. (It could be argued that my older relations’ somewhat dark perspective on the world owes more to growing up impoverished during the Great Depression than to having genes coded for grumpiness. But that doesn’t excuse MY propensity to kvetch – so I’m sticking with my theory. I was BORN this way.)

While my Dad’s side – honest, soft-hearted, generous, hard-working, good people, by the way – are usually the objects of my accusatory finger-pointing, today I am going to complain, in my Mohrorish way, about a legacy of the Welsh side. Specifically, funny knees.

Recently I had a conversation with my doctor on this subject. “In my family,” I explained, “our knees tend to migrate inward.”

The doctor nodded. “Yeah. Okay, that can’t actually happen, though.”

“But it does!” I was very firm on this point. What we call “Millie’s knees,” after the beloved aunt whose affliction first brought the issue to the forefront of our familial consciousness, is a real thing. How well I remember that day when I heard my mother, in the middle of dressing for the day, suddenly exclaiming, “Oh, my God! I’ve got Millie’s knees!” And so, now, do I.

The doctor had me stand. She ran her hands up and down my calves and knee joint as if examining a lame horse, then frowned gravely. “Well … you’re a little knock-kneed.”

“What does THAT mean?” I demanded with Mohror-like peevishness.

“Your knees angle in and touch each other, instead of facing straight on. But your kneecaps are in the right place; it’s your legs that are turned wrong.”

Technically, this condition is called Genu valgum, which sounds like the name of one of the more convoluted, late-series alien conspiracy episodes of X Files. 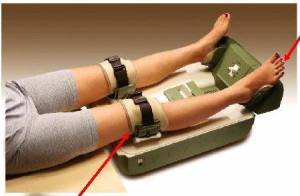 And apparently there are devices that can nudge your knees – er, legs – back into alignment over time. But the thought of strapping myself into one of those things produced a flashback to my earliest childhood. I was born rather substantially pigeon-toed. (Misshapen joints seem to be a theme with me, though I don’t think I can blame any long-dead Welshes or Mohrors for this one; it’s my own mutation, apparently. Hurray! I always knew I’d accomplish something in life.)

These were exactly as comfortable as they look.

Anyway. As a toddler, I was prescribed corrective shoes to wear overnights to cure me of this deformity. I still hold in my mind an image – probably my earliest memory – of the screws that held this contraption together. I didn’t wear them long, my Dad having decided it was cruel to subject his littlest one to this torture. Ah, there’s that Mohror soft-heartedness again. And since as an adult I only rarely trip over my own feet, I think he made the right call. 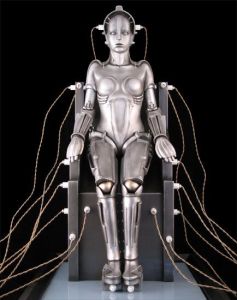 That’s why I will not seek treatment for my Millie’s knees disease. I’m going to assume I will eventually grow out of it, as I did my pigeon toes, without high-tech intervention. That failing, I will hope to live long enough to have my consciousness transferred into one of the gleaming, perfect android bodies that science fiction has always promised us.