There’s an amusing commercial for ancestry.com in which a man who grew up in lederhosen discovers, via his DNA test, that he’s of Scottish, not German ancestry. So he trades in his Teutonic garb for a Celtic kilt. (To be honest, the sight of a grown man in either short pants or a skirt in this part of rural Minnesota would make for an uncomfortable scene, but I understand other parts of the world are more liberal about such things.)

I had a similar experience recently when the top boffins at ancestry.com’s DNA lab analyzed the goo I hocked into their test tube and declared that I am predominantly Scandinavian – 54%, to be exact. My “Western European” ancestry comes up a paltry 16% – presumably that’s the German, but it could just as well be French. Good God! Has the world gone mad?

Could these people look more Germanic? I don’t think so.

Family tradition has always dictated that I am Irish on my mother’s side (borne out by ancestry.com at 24%) and predominantly German on my father’s side (with a side of Norwegian from my Grandma Mohror, though her maiden name, Bergley, defiantly comes up Scottish in Google searches).

The fact that I (or at least my sputum) actually derive from more Northern lands creates some awkwardness. You see, we’ve always attributed our least desirable personality traits to our Germanic genes. When my often taciturn father stomped around mad, or lapsed into one of his moody silences, my mother would shake her head and murmur, “That’s the German in him.” Of course, we also claimed the more attractive stereotypes of the Deutsche Volken: industriousness, ingenuity, punctuality, loyalty. 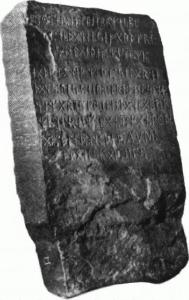 The Kensington Runestone, which may have been carved by Vikings. Or Knights Templar. Or some local farmer looking to make some dough off the gullible tourists.

I grew up in predominantly Scandinavian rural Minnesota (Alexandria: Birthplace of America! If you believe America was discovered by Vikings, who took the time to chisel their experiences into a hunk of granite). The Norwegians and Swedes around me always seemed a clannish sort with strange customs (A crown of lighted candles on a little girl’s head? That can’t be a good idea.) and even stranger food traditions. I mean, lutefisk is fish soaked in lye, for heaven’s sake. Hello, lye is a deadly poison. Between that and the candle hats, I have to wonder if the Scandihoovians practiced a fairly brutal form of population control back in the day.

So what am I to do with this new information? Buy a rosette iron? Start rolling out lefse every Christmas? Add a few more “uff das” and “ja, shure, yew betchas” into my everyday speech? I find myself in kind of an existential crisis here. Who am I, really, in the deepest essence of my being?

And most importantly, what the hell am I supposed to do with this T-shirt?

One response to “My Secret Identity”