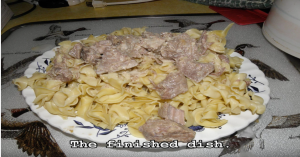 You can’t see the puddle of “sauce” that leaked to the bottom of the plate under all the noodles.

Here in central Minnesota, any dish that includes noodles and some kind of creamy sauce is known as “hotdish.” Hotdish is the greatest thing ever invented, by the way. There is nothing that cannot be improved by pouring a can of condensed cream of mushroom (or cream of chicken, in a pinch) soup over it. Got leftover meat and vegetables? Throw ’em in a baking pan, smother ’em in soup and bake until bubbly. If you want to get extra-fancy (company’s coming!), crumble potato chips over the top. Now THAT’S good eatin’.

This entry in the #10MealChallenge is called “Scrumptious Beef Stroganoff,” but let’s be honest: it’s hotdish. (The original dish is also Russian, not French, but I don’t do a Russian accent.)

Authentic beef stroganoff apparently involves floured beef cubes, bouillon (I knew there had to be some French in there) and a dollop of sour cream.; no mushrooms My own favorite recipe for the dish includes hamburger, cream of mushroom soup and LOTS of sour cream.

This recipe from Tastefully Simple is made in a crockpot. Although the directions clearly specify that you add the sour cream to the pot only AFTER cooking the meat for seven or eight hours, I added it along with all the other ingredients. The result was that the sour cream apparently degenerated into its component parts, and I ended up with a very soupy sauce. Tried to doctor it up with more sour cream and cornstarch, but it never really did reach good hotdish consistency. Sad times.

If I make this again, I’ll add a can of cream of mushroom soup. Because it ain’t hotdish without the Campbells.